Blowin' in the Wind- 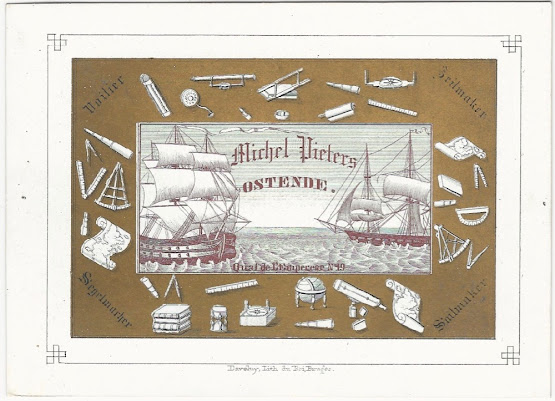 An exceptionally busy and handsome gilt and cream card for Michel Pieters of Ostend, Sail-maker. Printed by Daveluy in Bruges.

Clay-coated-stock polychrome card. 5.5”x4”. Minor soil, light wear. Removed from an album with some paper residue on the back. $275

Posted by Joslinhall at 1:24 PM No comments: 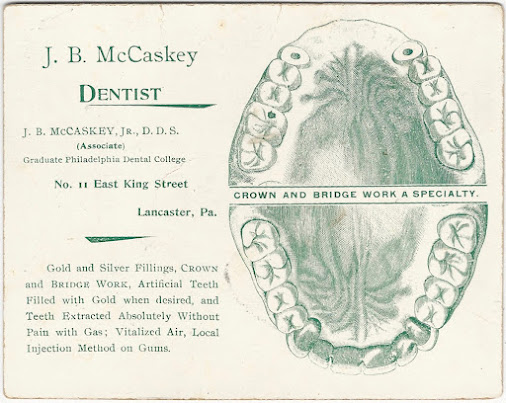 Dr. J.B. McCaskey of Lancaster, Pennsylvania was putting his money where your mouth was, so to speak- right up front on this dramatic if slightly unsettling trade card. The good doctor extracted teeth “absolutely without pain with gas; vitalized air, local injection method on gums”. Vitalized air sounds intriguing.

Posted by Joslinhall at 4:46 PM No comments:

I Can See Clearly Now- 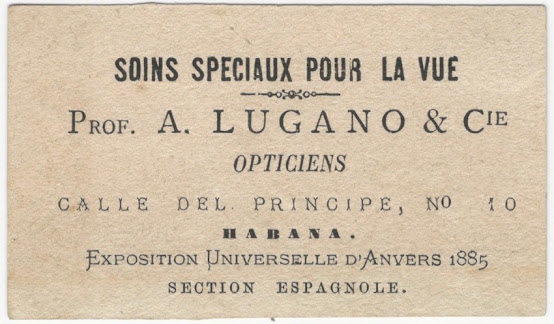 A trade card for Prod. A. Lugano & Cie. of Havana, “Soins speciaux pour la vue - Opticiens”. The card notes that the firm was located in the Spanish section. The 1885 Exposition Internationale d'Anvers was held between May 2 and November 2 in Antwerp, during the 20th anniversary year of Leopold II’s ascension to the throne of Belgium. Spanning 54 acres and featuring displays from 25 countries, it drew 3.5 million visitors and cost 4 million Belgian francs.

Posted by Joslinhall at 10:59 AM No comments:

A Note from the Editors- 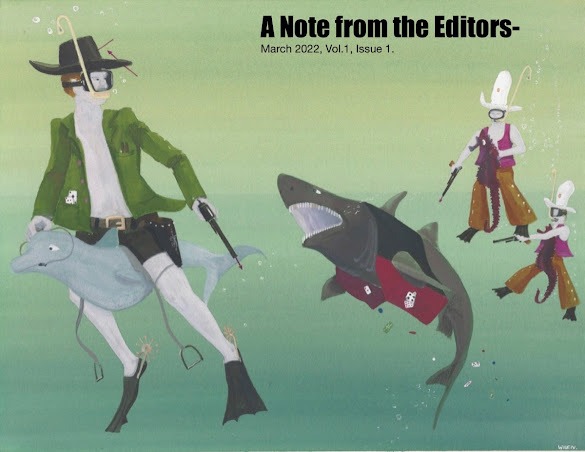 Announcing the first issue of our new catalog series, A Note from the Editors. We’ll be publishing these every month, with a selection of recent acquisitions, interesting or odd backstock, and other bits and pieces that we find along the way and want to share- this & that, flotsam & jetsam, pictures & poems, whatever amuses us. There are a lot of catalogs out there these days, a lot of stock, a lot of things screaming for your attention, and we hope to make it worthwhile to spend a bit of time with us each month because we give you something a bit different. Whether or not  you find anything here to buy, we want you to have some fun along the way.   -the editors.

Posted by Joslinhall at 1:39 PM No comments: 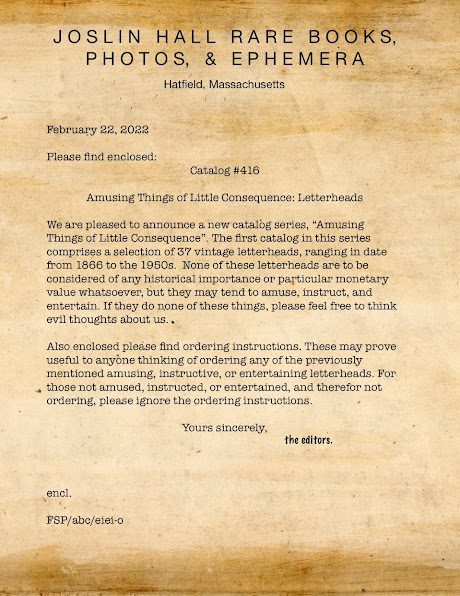 We are pleased to announce a new catalog series, “Amusing Things of Little Consequence”. The first catalog in this series comprises a selection of letterheads, ranging in date from 1866 to the 1950s.

Posted by Joslinhall at 3:35 PM No comments: 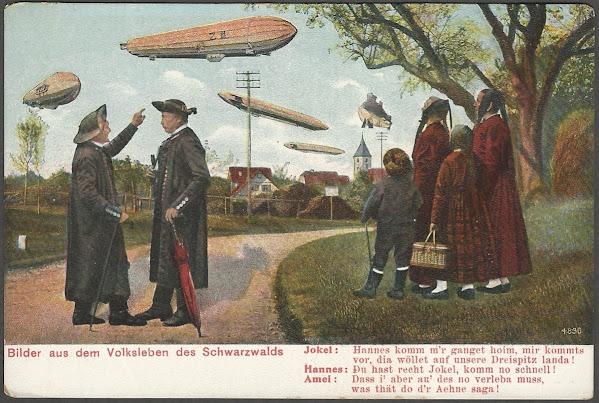 A humorous glimpse of “Folk Life in the Black Forest”, as the locals are bothered by a fleet of airships (they apparently have come to steal everyone's tri-corn hats). 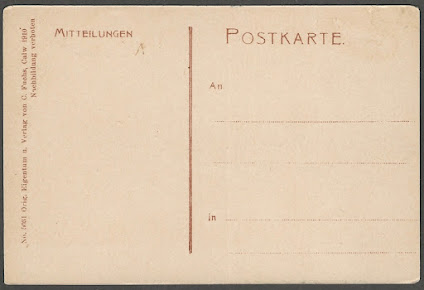 Posted by Joslinhall at 4:37 PM No comments:

Put that in your pipe and smoke it- 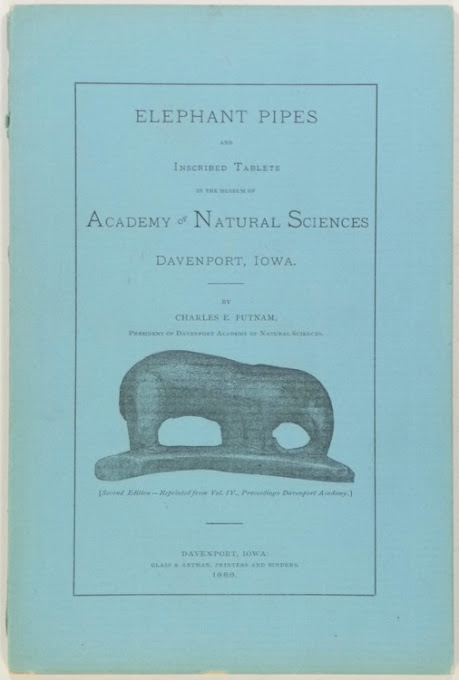 "Elephant Pipes and Inscribed Tablets in the Museum of Academy of Natural Sciences, Davenport, Iowa".

In the winter of 1877 amateur archeologist Rev. Jacob Gass made a series of incredible discoveries while excavating an ancient Indian burial mound on a farm in Davenport, Iowa. The relics in question eventually included several incised slate plaques, one apparently with a calendar and another with writing, and a pair of stone "elephant" pipes.

Controversy over their authenticity raged almost from the moment of their discovery, but the Davenport Academy, including a young scholar named J. Duncan Putnam, staunchly defended them. When young Putnam died at the age of 26 in 1881 his father, Charles E. Putnam, took up the cause. A wealthy lawyer, Putnam was one of the major funders of the Academy, though not one of its "inner" social set. Putnam published his first broadside in defense of the pipes and tablets in 1885, followed a year later by this, much expanded edition.

He was shouting into the wind. After a series of disparaging reports by, among others, the Smithsonian, Putnam swung into full gear and what followed soon began to resemble a Gilbert & Sullivan operetta. Critics within the Academy were "investigated" and expelled in a witchunt resembling the Red Scare of the 1950s; lawsuits for defamation swirled around like raindrops, and yet... and yet...  many of the Academy members, though evidently not Charles Putnam, knew all along that the whole thing was a hoax.

They knew it because they did it.

As it later turned out, many members of the "inner" social circle within the Academy were jealous of Gass, an outsider who didn't speak very good English, and decided to have some fun with him by burying some hastily faked artifacts in a mound they knew he would be digging in over the winter. Evidence suggests that Gass himself came to realize this in his later years. Whether Putnam ever did will remain an unanswered question, but he may have. In June of 1887 his mansion and all his papers burned. Charles Putnam died six weeks later at the age of 63.

Posted by Joslinhall at 9:21 AM No comments: